September, 1944, Western Slovakia.
Eleven American airmen had made it to Banska Bystrica in time to catch the September 17th flight back to Italy, but others were not so fortunate. George Fernandes and his group, for example, had been moving cautiously through the German lines.
"We had been warned that some Slovak families were German sympathizers," Fernandes remembers. One woman answered the door of her farmhouse and asked them if they were "from Grinava." Fernandes realized the Germans had been spreading the alarm. "This woman was frightened about our being at her house-not afraid of us but of the possibility of German reprisals. We moved on."1
Fernandes' group ran into four Partisans who took them to the same Partisan camp that Neal Cobb's group had just left two days before. They were reunited with "Scotty" McSorley, who had become separated from his buddy, New Zealander Gordon Follas. McSorley was traveling with Sam Strode, the tail gunner from Ira Corpening's crew.
Jack Wilson, the British agent, was there, still recovering from ingesting the cyanide pill. Meanwhile, Cobb's group was moving faster, perhaps because of their confidence that Frank Soltesz could speak Slovak and get clear directions and information on the location of German troops. Soltesz also was able to get food from the farmers.2
Fernandes had several long talks with Jack Wilson who claimed he was from Scotland. Actually, he was a Viennese who had migrated to Scotland. His native tongue was German, and his real name was Wanndorfer. Wilson also spoke fluent French. Fernandes persuaded him to join their group as preparations were made to move on. Wanndorfer never told Fernandes his real name.3
The following day a German patrol attacked the Partisan camp, and the men split into two groups and sprinted into the woods. Fernandes' group now included Wilson, Frank Bulfin, Bob Hede, and Howard Coleman.
They walked six miles through the hills to a small village, and two days later, they went to Krajne, a larger town where they would remain for two weeks. One of the Partisans took them to Michal Knap who operated the town bakery. Fernandes was surprised to discover that several people in this small village spoke English. Michal's brother, Martin, operated a tavern.
Michal Knap arranged to hide the men in three different households at great risk to the families. German vehicular patrols came through the village regularly. A few days later, a German patrol appeared suddenly, driving slowly down the street. The locals spread the alarm enabling Wilson, Bulfin, and Hede to dive out of windows or dash out rear doors and sprint into the woods.4
Coleman and Fernandes were in another house across town. Alerted, they also ran into the woods. Later, the Knap family moved the men to a farm owned by Jan and Katarina Galik on the edge of town. Katarina was Michal Knap's sister. Hede and Wilson already were there. The men slept in the loft for ten days, working on the "Lashteki farm, as trie Galiks called it. They shucked corn and weeded vegetable fields. Coleman, a farm boy from Virginia, tried to teach the farmers some improved methods of farming, but his hosts smiled and ignored him.5 Nevertheless, the threat of discovery by the Germans was constant.
At night Fernandes would slip into town and listen to the BBC with Michal Knap. During the day, the men worked around the farm and killed time amusing themselves teasing Galiks' flock of domestic geese. Katarina Galik, who had lived in France for a rime before the war, enjoyed speaking French with Jack Wilson.
At Lashteki, the Fernandes group ate well. Also hiding with the Galiks was Dr. Eugem Kulka, a Jewish physician from Prague, and more recently, Piestany. He was a pediatrician and cared for many of the people in the Krajne area. The Galiks had constructed a hiding place in their home behind a double partition where Kulka hid when the Germans visited the village.6
One day nearly two weeks later, Frank Bulfin was picking apples at Leshteki. The other four men were a half-mile away at another farm called "Spotzky" where they were shucking corn when a patrol of Germans entered the village. Bulfin hid in a ditch while the Germans carefully searched the farm. Katarina Galik ran to the Spotzky farm to warn the others.
The Knaps and Galiks finally decided it was time for the men to move on and Fernandes agreed. The Slovaks lived with the threat of German reprisals hanging over their heads. A Partisan led the group back to Jan Repta's camp at Brezova. Fifty-four years later, George Fernandes would visit Krajne for an emotional reunion with Michal and Anna Knap.

September, Brezova.
Here they met Repta and were reunited with Gordon Follas, their popular buddy from Grinava. There also was a group of four American airmen there who had been shot down on September 13, Richard Rippon, Guy LaFata, John Kacaja, and Ben Raczka. A Russian fighter pilot who had been flying an American P-39 Bell Aircobra also was at the camp. Ben Raczka and his B-24 crew had been shot down about 10 miles northwest of the camp. He escaped the Germans with the aid of two young Slovaks who later were betrayed by villagers sympathetic to the Germans. The SS shot the two boys.7
Fernandes and the others were surprised to meet an attractive female Partisan, Sonya, in Repta's brigade who had grown up in Ohio and spoke excellent English. It was a strange war.
Follas had been eager to show Repta his skills as a fighter, and went on his first raid while Fernandes and his group were at the camp. The Partisans set an ambush on a mountain road. A German motor column had been driving slowly up the winding route when Follas, waiting in the bushes by the side of the road, jumped up on the running board and shot both the officer and the driver. He took off running and the German soldiers chose not to give chase. Follas indeed had impressed Repta and the Partisans.8
The next day and that night, Fernandes talked with Follas about coming with them to Banska Bystrica, but the fiery New Zealander was adamant. Follas said he was staying with Repta so he could "kill Germans."9
Some of the men who had fled the camp at Grinava already had reached Banska Bystrica. Others were walking there. Richard Moulton and his buddies, meanwhile, were back at Modra counting the days. Jack Kellogg, who had endured half of July and most of August in solitary confinement in a Budapest prison was settling down in the British compound in Stalag Luft III. His new roommates included tunnelers in the Great Escape which occurred the previous March. Kellogg had been grilled by his interrogator in Budapest because he was captured in civilian clothes. The Luftwaffe officer repeatedly accused Kellogg of being an intelligent agent. Kellogg learned years later that the OSS used the "I'm an airman" cover story to attempt to fool the Germans if they were captured. John Schianca, Thayne Thomas, and Robert Donahue, meanwhile, already had arrived back in the States and were enjoying family reunions. 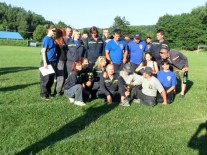